-Comparisons to other PRO sports

- My suggestions for the FUTURE! The sport of roundnet is very limited in terms of 'data' collected on the sport.

To continue progressing in the most positive manor, it is up to not just the Spikeball Roundnet Association (SRA) to collect data to fuel progress, but us as players as well.

With this power in our hands, we have the opportunity to mold the trajectory of the sport of roundnet, and how future generations play the game.

**That data and feedback can come in many forms, READ MORE BELOW!**

What Does the DATA Say?

There were 168 votes cast on the poll, "Technical Skills or Athleticism? What Draws More VIEWERS to Watch Roundnet?", which makes me ecstatic!

Along with that excitement, this poll provides some valuable data, and user feedback, for the roundnet community.

Out of 168 total votes, the voters made it CLEAR what they prefer when WATCHING roundnet game play. Athleticism!

This shows what viewers want to see, doesn't always correlate with what is currently viewed as 'winning' roundnet - hard serves to produce aces.

I love what polls add to articles, in terms of excitement and reader engagement.

Even more so though, WE NEED MORE DATA, especially in the 'young' sport of roundnet.

We Have the Data... But What Next?

What do the limited results of this survey mean?

Do the rules of the sport need or the equipment need to be modified to produce a better viewing experience?

Does nothing need to happen?

Let's look at some previous data and discussion on the sport of roundnet!

First EVER Study on Roundnet

In 2016, the first ever large study on the sport of roundnet was published, "A DESCRIPTIVE STUDY OF ROUNDNET".

The first of it's kind study was published by myself, Tom Witt, to help fulfill the graduation requirement for a masters degree in kinesiology from Chico State University, in Chico, CA.

Below is more background information and data from the study:

The purpose of this study was to examine the heart rates, step counts, motor skills, and attitudes of male roundnet participants during match play.

More specifically, the study determined if roundnet kept participants in their target heart rate (THR) zone and measured the frequency of steps while playing.

Finally, the researcher surveyed participants to determine their attitudes and motivations for participating in exercise and roundnet.

The researcher recruited 20 male volunteer participants between the ages of 18 and 27 to play six games of roundnet to a winning score of 21.

Different reasons which drew participants to roundnet include novelty, physical fitness, and enjoyment of participation.

What All That Information Means!

This study provides an initial database to support roundnet as a sport that may help participants, children, and adults reach their health and fitness goals.

Including the sport of roundnet in elementary, secondary, and higher education levels may serve as an affordable and motivating sport to produce moderate to vigorous physical activity.

The article leads off with... the truth.

At the highest level of roundnet, that's the norm. Most people fall in love with the sport after a few great rallies, but as players' skills increase, rallies become less frequent, like Chris Hornacek drop shot infrequent.

The consequence of this is that the general VIEW-ABILITY of the sport suffers making it harder to attract fans, sponsors, and media coverage." (Increasing Rallies in Roundnet, 2018, Scotti, Jack, https://tournaments.spikeball.com/blogs/the-rally/increasing-rallies-in-roundnet)

What Is A Roundnet Rally?

According to the Spikeball Roundnet Association,

"*A rally is defined as 3 or more changes of possession."

The SRA article also compared the statistics of the Premier men's and women's divisions 2017 SRA national championships, which were played indoors in Chicago, Ill.

The data is shown in the table below:

After more analysis the SRA article came to the conclusion that,

"All around, these stats aren't good.

The SRA article goes on to suggest some ways to troubleshoot these problems; such as playing with a higher rim or inner circle, and doing nothing.

All the data is in the article, check it out!

﻿Serve percentage is a key stat to being successful in roundnet, and most sports involving a serve.

Here's a stat to consider, according to the International Tennis Federation you could expect to see a double fault at a Grand Slam once every 5 games... compare that to roundnet. YIKES!

The SRA article went on to analyze some serve and rally stats of four 'high level' roundnet matches from the Lancaster, PA tournament, which was broadcast on ESPN.

Below is some of the data.

Below are the some average serve percentages from other sports: More Modification Testing By the SRA

﻿﻿The SRA went on to release a 'Part II' of their 'Increasing Rallies in Roundnet - Part II'.

The SRA tested out seven different modifications and compiled this table with all the data they collected and analyzed.

"In the latest round of testing we tried out 7 variations. Overall the raised rim had the biggest effect on rallies. The taller set and double fault were the most well received by players that participated. The outside setter and looser net were a flop. More detailed descriptions below.

﻿﻿In 2018 two authors, Grimm and Tomschi, took the suggestion of Witt's "A Descriptive Study on Roundnet" and looked deeper into the physical demands of roundnet, with a study titled "Investigation of exercise intensity in competitive roundnet/spikeball".

The aim of this study was to evaluate the physiological demand of male roundnet players during a roundnet match.

In a pre-experimental test, all participants conducted a ramp-based treadmill test with spirometric measurements.

In a subsequent field test, participants conducted a roundnet game in accordance with the official rules.

Results of the field test showed that participants reached a maximum HR of 159.7±7.9 bpm corresponding to 83.9±3.6% of the participant’s maximum HR.

﻿What That All Means:

To conclude, this study presents game characteristics and the physiological demand of the trend sport roundnet.

Results indicate that the physiological demand can be described as moderate as none of the measured parameters reaches disproportionately high values." 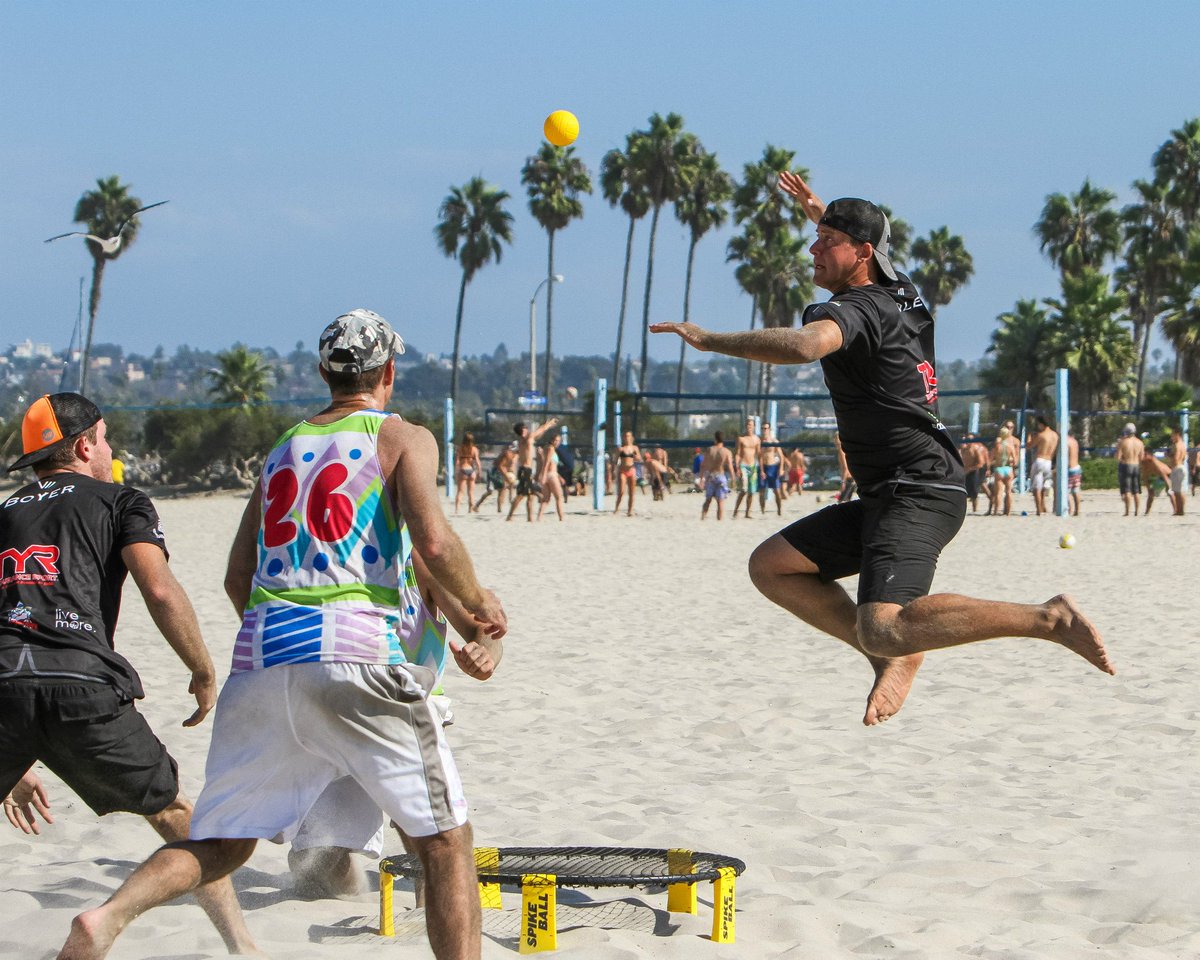 How YOU Can Collect Your Own Data...
And CHANGE the Sport!

You can help change the sport, and either validate what we are doing as best practice, or show a need for change. And you get to play some roundnet, and be a CRUCIAL aspect of growing our sport!

Here are some suggestions the SRA makes and ways you can record that data to put your hard work into action!

"Our methodology was to record all games and then track the results of each point. We used a simple spreadsheet that was laid out like this

For any changes to be considered a 'success' by the SRA they must meet these criteria:

"For any changes to be considered a success, aside from just increasing rallies, they must also:

In other words, increasing rallies isn't the end goal, but rather a vehicle to making the sport more fun to both play and watch.

Test out some modifications of your own or experiment with the ones we've tried and let us know what you find!" (Increasing Rallies in Roundnet - Part II, 2018, Scotti, Jack, https://tournaments.spikeball.com/blogs/the-rally/increasing-rallies-in-roundnet)

-Hold off on always hitting that low percentage serve, especially on your second serve - give your defense a chance. Be strategic with your 'big' serve(s).

-Work on defense, reading the set and setting yourself up for the most success possible on defense (sometimes it's impossible to take away all angles so take away their best shots or even throw in a defensive FAKE to throw off the offense!), -

-Communicate/talk strategy with your teammate between points, games and even between tournaments.

WE hold the power to the progress of the sport of roundnet!

Link to Recent Article By Tom Witt on Roundnet World: